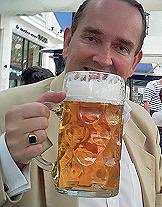 "Following discussions between host country authorities and FIFA, a decision has been made to focus the sale of alcoholic beverages on the FIFA Fan Festival, other fan destinations and licensed venues, removing sales points of beer from Qatar's FIFA World Cup 2022 stadium perimeters."

Let's see what else Qatar bans at the last minute!

So who took the bribes then when the FIFA gave Qatar the World Cup?